March, 6th 2017, 6.30am local time in Alor, our first boat, KM. Kanaloa was born. She was cruising gracefully on the ocean of Nusa Tenggara Timur, Indonesia. We blessed and so grateful that many people helped us & excited to make it come true. We believe (and hope) she will bring so much joy, fortune and goodness for us, our guests and all people in Alor. Kanaloa Jumped To Ocean For The First Time

Kanaloa is one of the four major Akua (Gods) of traditional Hawaiian religion. He (she) is associated with the ocean, long distance voyaging, and healing.

*NB: We argued to call this boat He or She, because originally Kanaloa is a god, but in general shipping & voyaging, we’ve been called a boat with feminine form. :)) 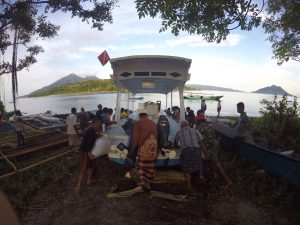 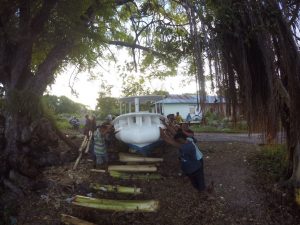 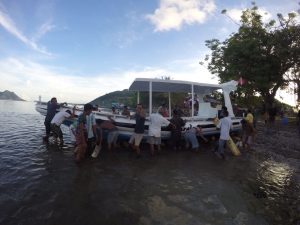 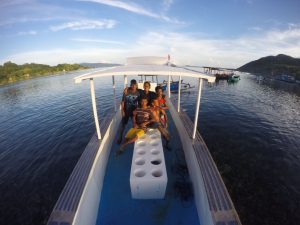 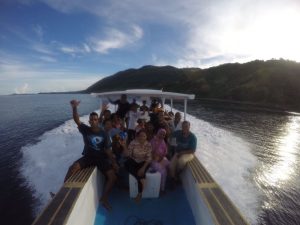 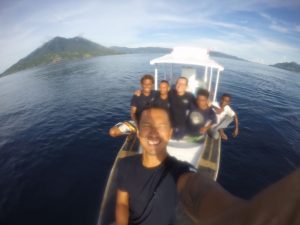 I’d like to share a little story about this. Taken from Willy’s post several days ago on Path, he shared about how this boat being planned and made:

“Felt like yesterday i met Andro, the boat maker guy down by Mangrove area at Lembongan. If its not because of Moyo who want to make a boat i wont met this person. We had meetings at Warung Gili over dinner, went to Bali on motorbike carried heavy stuff and bought all the materials and then sent them all in an expedition.

I watched him work from scratch, Andro is a genius, not just one day just before dusk he stands from a far watch the piece of the boat that he’s making, scratching his head coz he need to find a solution how to make it with just what he had knowing that we are tucked in almost out of nowhere and then he woke up the next day with a solution and try something to work it out. Sometimes it didn’t work but most of the times he just surprised me. Not only that, the unpredictable weather is driving us crazy as well, its frustrating for me and i just there watching him, cant imagine what it did for him, but he persevered and made it. He might be small but his heart as big as the ocean.

He said “i started build this boat on the 12th of November 2016 and i finished it on the 20th of February. This is the first boat i built under my own name, we started from scratch boss and yet we made it! Thank you for this opportunity.” And i said “no thank you for all the hard works and all the determination my friend, you are one of a hell tough dude for sure!.”.

“Kanaloa” is the named i propose to my partners and they agreed with it, taken from a Hawaiian meaning “God of the Ocean”, i just felt its a very good name since the beginning. And with Acionk’s magic hands his name crafted beautifully on his body. 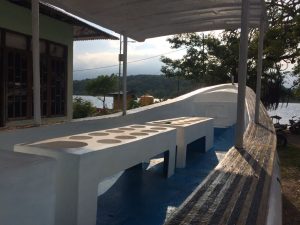 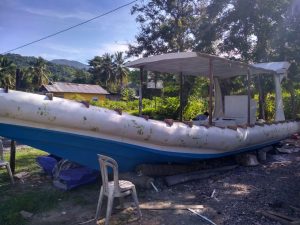 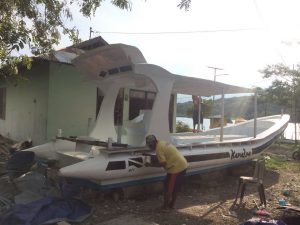 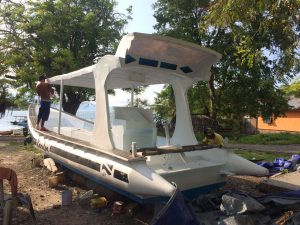 So today, after last nite little ceremony from the elder, he decided that the boat need to be on the water before 6:30 AM. By 5:45 AM Alor Kecil villagers already gathered around Kanaloa. Its amazing how they just showed up and giving us hands on pushing the boat. I can understand their excitement coz Kanaloa already a celebrity since the first day. Everyone, literally everyone is looking forward to this day. So with everyone helps in less than 30 minutes, Kanaloa touch the ocean for the first time. Everyone so excited, splashing water, pushing me and Acionk off the boat (its mandatory part of the celebration the said).

We end the morning by cruising on him, all take turns get on and off the boat just to feel a glimpse celebrity of the day.

And thats my family and friends is a story about #Kanaloa.” ~ Willy Irawan on #Kanaloa