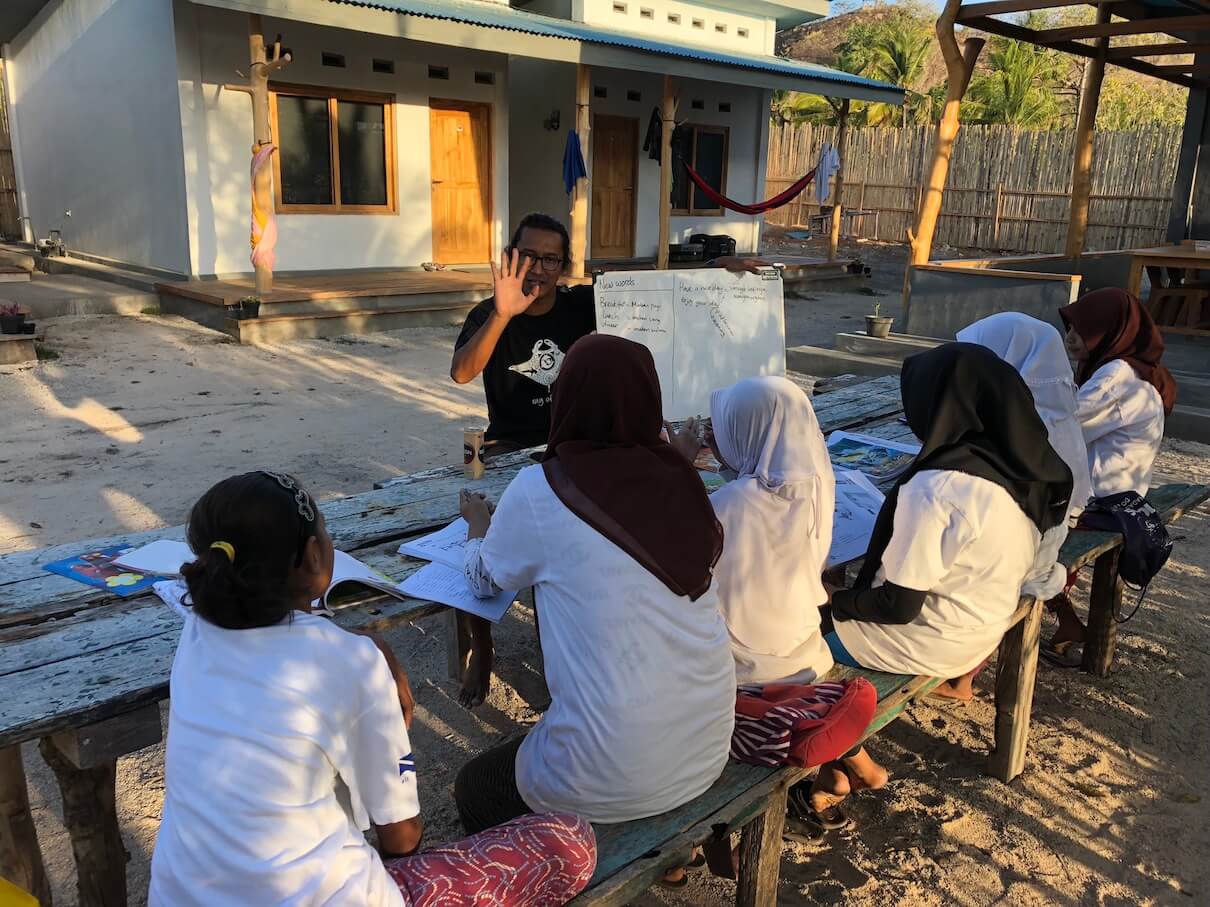 One of the first things we noticed when we moved to Alor Kecil was its national school, about 300 meters far from our dive center. It sits strategically elevated on a hill, overlooking the beautiful Kalabahi Bay. A school with a view, if you will. We were surprised to learn it is the oldest school in Alor Kecil and probably in Alor Regency, built during Dutch occupation in 1910’s. That’s how we found out that Alor Kecil used to be the capital of Alor Regency. Who would’ve thought this fishing village has such an interesting history!

Most adults in Alor Kecil are its alumni and it comes naturally that their children attend the same school. We know many of the children. It started when we stayed in Oma’s house while the dive center and the dive boat Kanaloa were being built. Every morning the children would (and still do) greet us on their way to school and later after school, they would check what we were doing.

Many a time, they would ask us to teach them English. They wanted to be able to converse with foreigners visiting Alor Kecil, they said. We understood at that time that English Class, as in most underdeveloped parts of Indonesia, is taught starting in high school. Meanwhile, their contemporaries in big cities are usually taught English in elementary school, some even in kindergarten!

“Their wish reminded us of one of our goals: we want Air Dive & Stay to grow with the community. We thought that giving English lessons pro bono could be the answer, a way for us to contribute to the community,” recalls Willy. Touched by their eagerness to learn English, we could not not say yes to them. 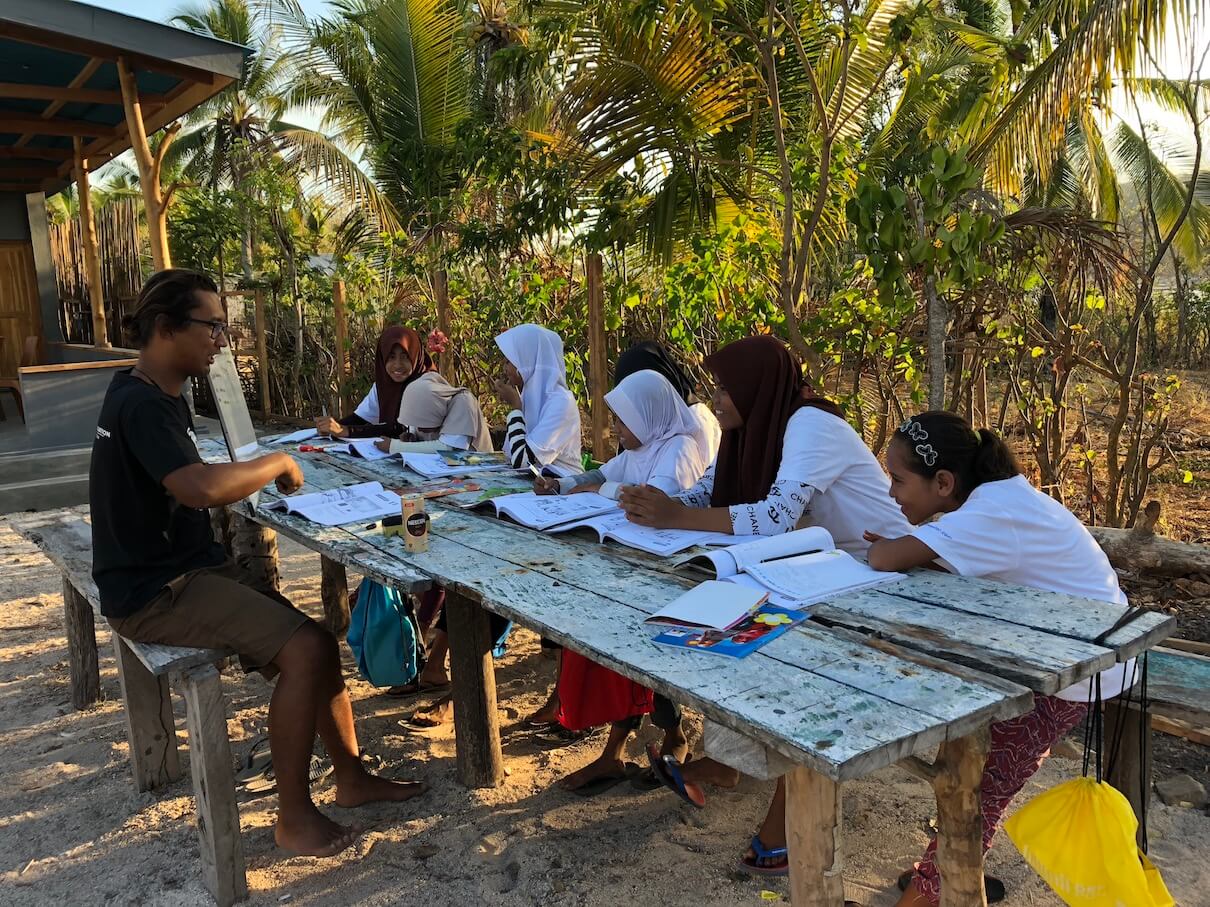 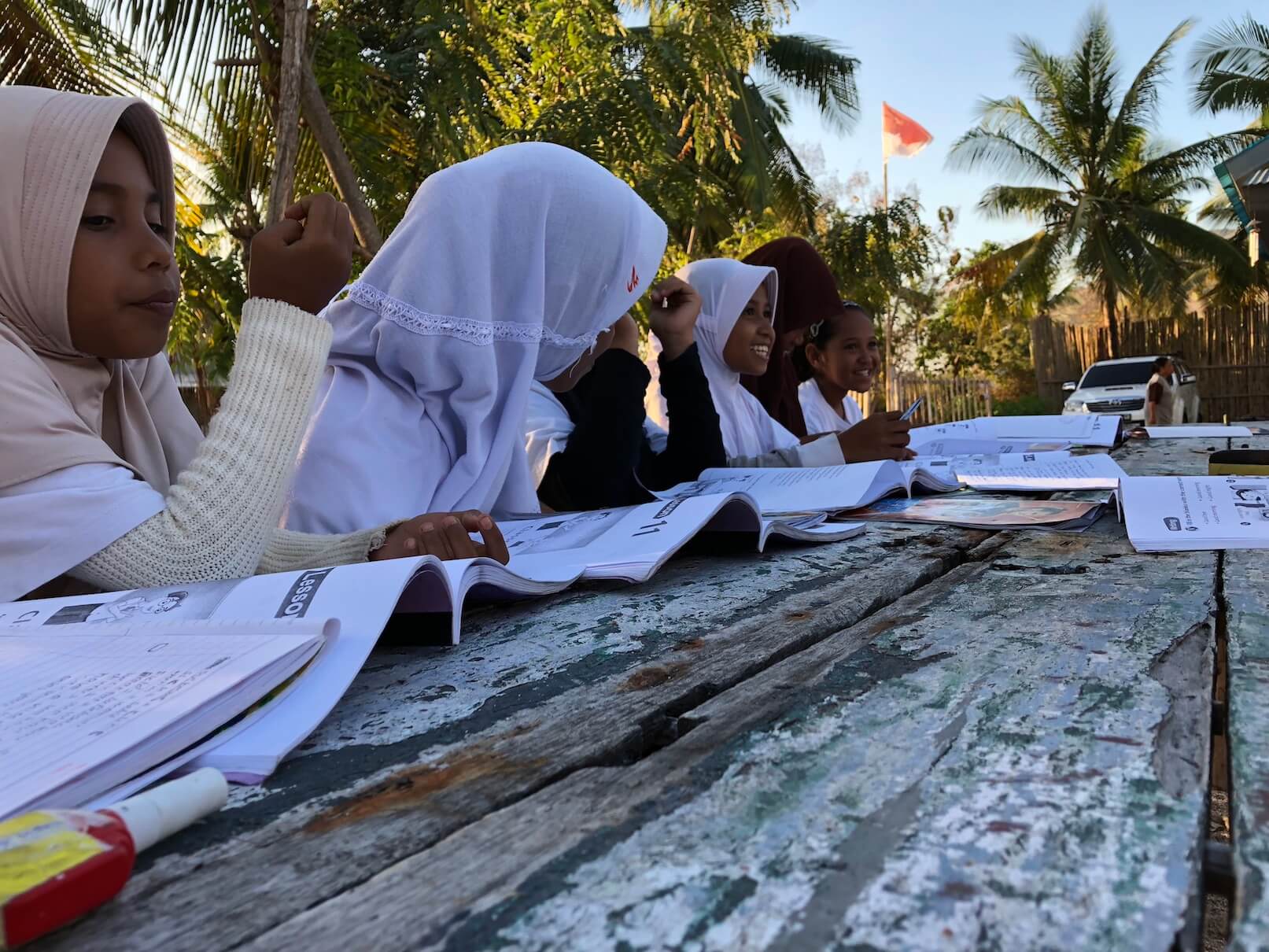 The future of Alor Kecil

The most suitable teacher candidate was Willy. We’ve already known his impressive portfolio includes 6 years of teaching parkour to children and teenagers. Besides, being a diving instructor, he undeniably has a passion for teaching. After all, he is great with children. Thus began our English class in September 2017—exactly a year ago!

The class takes place in our front yard, twice up to four times a week, attended regularly by about half up to a dozen students. It starts from 16.00 up until the sky mellows out.

Willy teaches them basic English and basic conversation. He even “dives” the extra mile to build the children’s confidence and broaden their worldview. We’ve witnessed him encouraging the students not to speak timidly and not be shy to initiate a conversation. “I try to convince them that learning a foreign language is beneficial and not difficult as long as they are willing to learn, that if they fail, they can make a correction,” explains Willy.

The class start from 4pm until the sunset 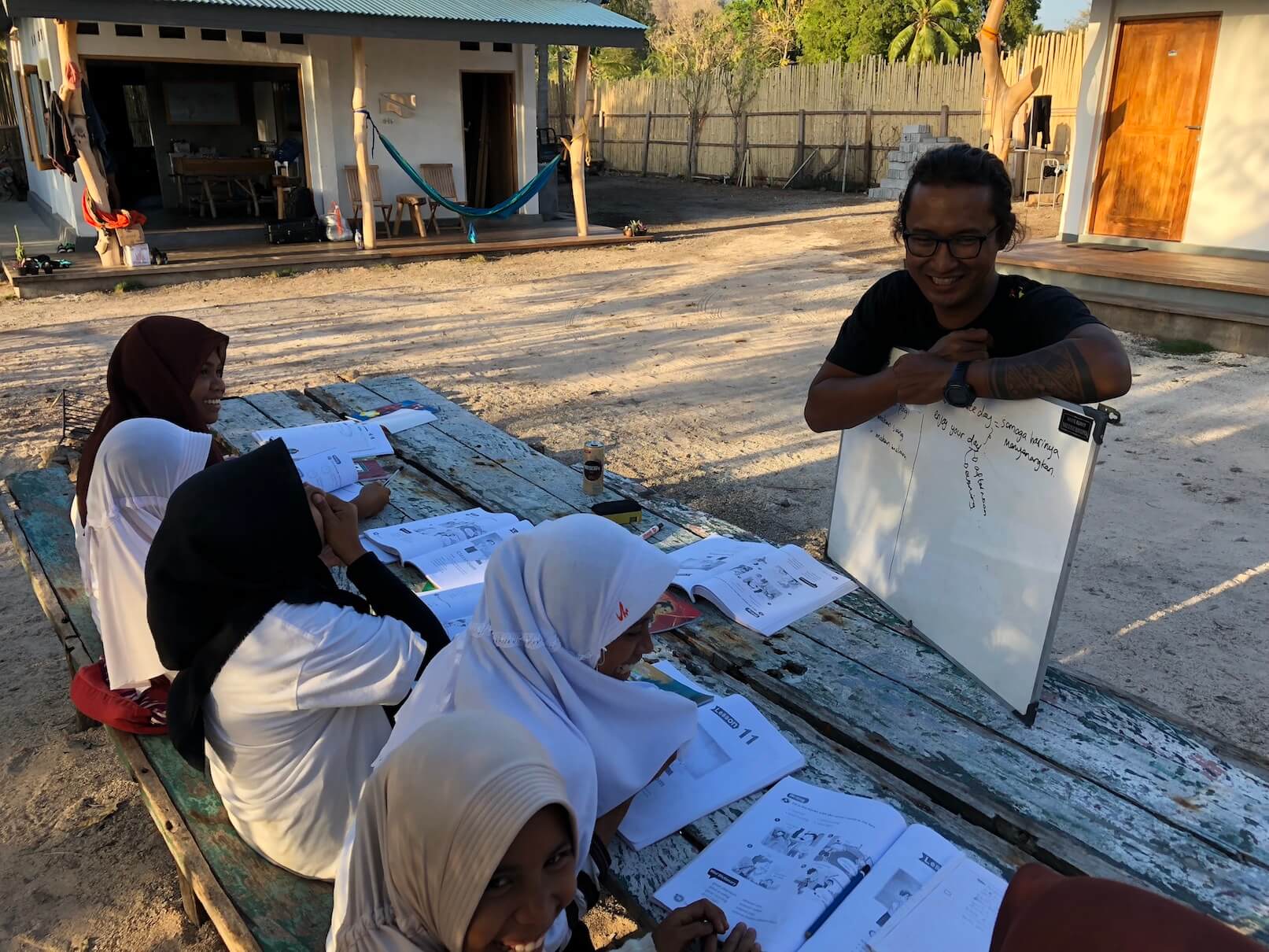 Willy and his students in front of our shop Happy to see their enthusiasm in learning 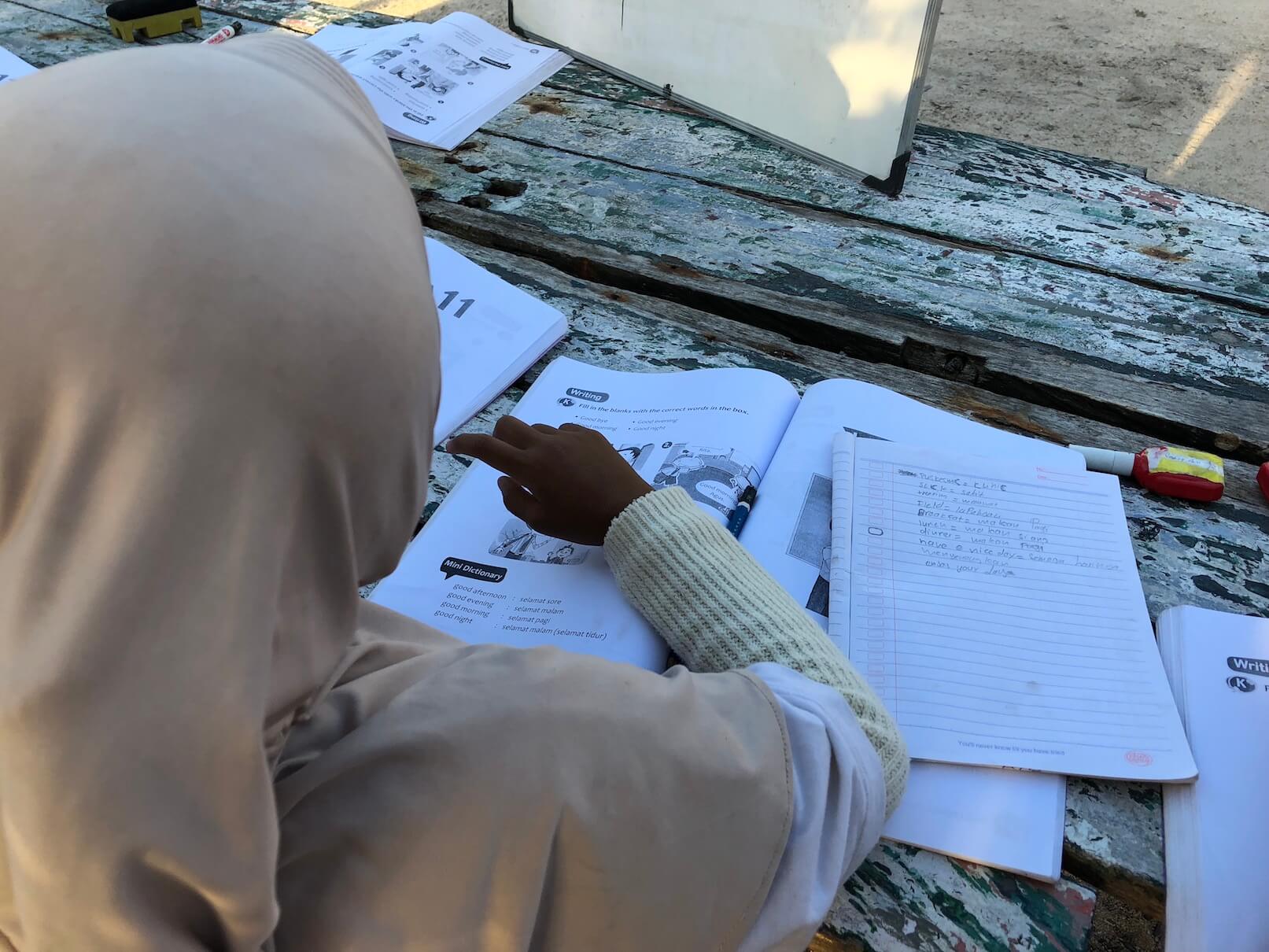 From basic conversation to the introduction of English grammar

As we have stated earlier, giving English lessons pro bono could be a way for us to contribute to the community. “It is not pro bono, though. They have to pay by picking up trash on the beach!” jokes Willy who leads the children on Beach Cleaning Sunday—our latest program which aims to make children aware of the importance of the environmental protection and appreciation. Willy adds, “By doing their part for their own environment, which is Alor Kecil, we hope it fills them with pride.”